As part of an initiative to drive down air pollution in London’s Square Mile a trial of the UK’s first fully-electric waste collection truck has begun.

As part of an initiative to drive down air pollution in London’s Square Mile a trial of the UK’s first fully-electric waste collection truck has begun.

The 26-tonne truck, named ‘Electra’, runs on lithium-ion batteries and is designed for urban environments with short routes and can complete a full 10-hour shift.

The trial is part of a wider fightback against air pollution in the Square Mile.

Its governing body, the City of London Corporation, works with businesses to improve air quality through its City Air Programme. In January, it launched a cargo bike delivery scheme to help City firms tackle toxic air by shifting deliveries from diesel vans to cargo bicycles.

It is pioneering a London-wide crackdown on drivers who leave their engines idling and its City Air app, which is used by 27,000 Londoners, gives users low pollution travel routes across the capital with advice and alerts when air pollution is high.

In 2016, the City Corporation agreed a deal with Addison Lee – London’s biggest private hire taxi firm – to automatically switch hybrid taxis to ‘electric mode’ in key areas of the Square Mile. It has banned the purchase of diesel vehicles from its own fleet of 300 vehicles, where there is a clean market alternative.

The City of London explained that the trial will last for two months in the Smithfield area, and that the vehicle will also be trialled in two other UK cities later this year.

City Corporation’s refuse vehicles collect around 1500 tonnes of household waste and over 850 tonnes of recycling a year.

“This vehicle is the is the first vehicle in the UK that is a fully electric, low entry refuse collection vehicle,” explained Jeremy Simons, Chairman of the City of LondonCorporation’s Environment Committee. “It’s fully electric, both for compression of the waste and for powering the vehicle, and crucially – no diesel emissions.”

“Our ambition is to have a full fleet of clean refuse vehicles. We are taking responsibility for the cleanliness of all our vehicles, encouraging the use of low and zero emission models with our partners,” he continued. “It complements the work we are doing to help City businesses cut back on vehicle deliveries and use more hybrid models.”

Russell Markstein, Commercial Director of NRG Fleet Services added: “This truck can deliver zero emissions rubbish collection in the Square Mile and long term, it could be a big step forward.” 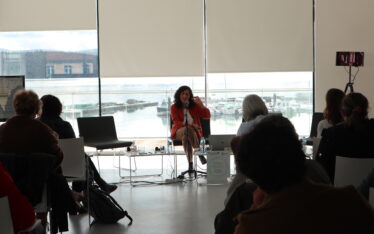