The initiative is coordinated by the Euskadi Environment Cluster, Aclima, and oriented towards facing the challenges of ‘diffuse contamination in urban water basins’; ie, uncontrolled spills originating from homes and from the tertiary sector in urban areas, which directly affect drainage, water treatment systems and the quality of discharge into the receiving environment. These substances are directly associated with very widespread customs and habits in society, such as the improper use of toilets, often used to dispose of any domestic waste materials.

Despite increased ecological awareness, the toilet continues to be one of the ‘valves’ enabling us to relax our environmental sensitivity, due to the mistaken perception that it digests and destroys all the waste thrown into it.

Indeed, beyond the search for technological solutions, it is considered needful to act on such habits and customs among the citizenry, since this is a dilemma that raises the need for a joint approach with the intervention of the key agents in the process, to prevent spills and modify household habits in both the urban tertiary sector and micro-SMEs.

In the framework of this project, and in keeping with two of its objectives – underscoring the problem and promoting citizen awareness – 2016 saw the start of the campaign, “Don’t feed the Monster/ Ez elikatu Munstroa”. This campaign aims to serve as a parable to warn against the technical and financial consequences of incorrect toilet waste disposal usage and practices, particularly regarding hygienic wipes, which provoke considerable problems in drainage systems.

The goal is to promote greater social awareness that will result in more responsible usage and practices, starting from the fact that the toilet does not absorb everything and, in sum, that citizens – apart from sharing a responsibility in the problem this creates – also hold a vital key to the solution, which entails the modification of incorrect habits, such as throwing hygienic wipes into the bins intended for holding trash.

As an attraction, the campaign has a striking and audacious graphic representation depicting the figure of a monster ‘feeding off’ all the waste thrown into the toilet, which in some way gradually provokes collapse in the drainage network, blocking various critical points. It has an active website (www.munstrowc.eus) and a social network presence (on Facebook and Twitter) to offer all sorts of information and advice on the proper use of toilets. The campaign image and message have also been ‘translated’ into a didactic video shot in motion graphics that seeks to convey the awareness-raising message regarding the problem in question and the manner of resolving it based on minor changes in our daily habits. 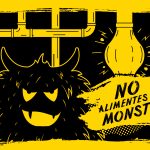