The global market for environmental consulting (EC) services climbed 3.0% in value during 2016 to reach US$29.4bn (£21.7bn), according to the latest research report published by Environment Analyst. Growth among the top players has been aided by strong demand in Europe as well as their proactive merger & acquisition activities.

The study is based on an in-depth analysis of leading international operators (the ‘Global 23’), with this year’s findings suggesting a much more even playing field between smaller environmental/sustainability specialists and those operating as part of larger, multidisciplinary technical and professional service providers.

Building on the 2.1% overall market increase recorded in 2015 (EA 06-Jan-17), the latest result represents the second consecutive year of positive growth across the industry worldwide and its best performance since 2012 (see Figure 1). Continued growth has been spurred by strong demand from infrastructure and development markets, particularly in Europe, as well as some fast-growing service areas including water and waste management and those related to environmental impact assessment. 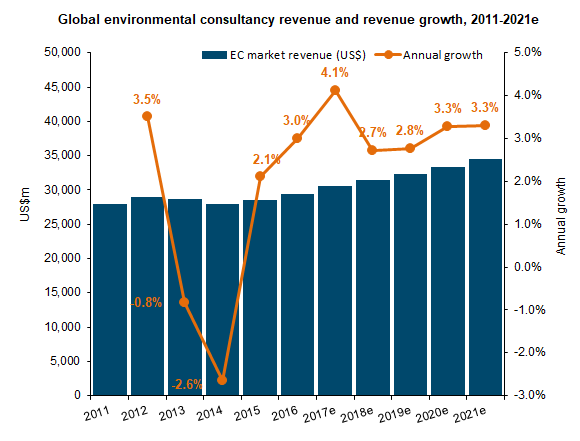 Furthermore, the signs for 2017 are extremely positive with growth set to improve again to just over 4% when figures are finalised for last year, according to EA’s market forecast model.

Editorial director of Environment Analyst‘s Global Market Intelligence Service and co-author of the report, Liz Trew, comments: «The market finally looks to be emerging with real conviction from the oil & gas and natural resources-influenced downturn which has impacted the global environmental consulting sector since the height of the commodities super-cycle – so much so that in revenue terms it has now comfortably exceed its previous peak value of $28.9bn in 2012. It’s welcome proof that the industry has successfully repositioned itself to a new economic environment with so many different demand factors at play compared to just five years ago.»

Geographically over half of global EC revenues in 2016 were focused on the North American region (51%), with West Europe taking just under a quarter (23%). Asia-Pacific ranked third with 15%, whilst Africa & Middle East (5%), Latin America (4%) and East Europe/FSU (2%) account for the remainder. The top three EC players each region are shown on the map below.

The latest fully updated and further extended edition of the report, now in its seventh year, provides a comprehensive picture of the current state of the global EC sector and competitive landscape through detailed company profiles and financial statistics from the Global 23 – comprising firms that are judged to be the most geographically diverse, globally ambitious and largest companies active in this field.

The peer group has been through an extended period of low growth and consolidation over the last five years, with many of these firms actively participating in mergers & acquisitions – some on a truly transformational basis. The Global 23’s increasing dominance of what is still a fragmented market is evident from the their combined performance in 2016, which saw the group’s aggregated EC revenues increase by 5.2% – to claim a combined 46% share of the total market. This contrasts sharply with the below-market performance in 2015 when their aggregated revenue rose by just 0.2%.

Yet despite the continued consolidation, only three players – AECOM, CH2M (now part of Jacobs) and Tetra Tech – hold an individual market share in excess of 5%. Mega merger activity saw the entry lower down the table of two new players to the Global 23, Wood and Stantec, thanks to their acquisitions of AMEC Foster Wheeler and MWH Global respectively.

The report categories the players in terms of three core business models – large-scale integrated firms, multidisciplinary consultancies and environmental/sustainability specialists. The most recent analysis shows that, following several years of diverging fortunes which appeared to favour first the specialists and then their larger competitors, 2016 saw a fairly consistent performance with all three model types achieving internal (organic) EC revenue growth of c1-3% (when the impacts of M&A are stripped out of the picture). But when measured over a three-year period (2013-2016), internal growth was negative across the board, pointing to the lingering effects of the commodities downturn.

New critical analysis introduced to this year’s report edition looks at the key strategic priorities amongst the top players as they have adapted to this extended period of challenging global economic conditions. More than ever these firms are focusing on addressing market cyclicality, the trend towards larger and longer-term contracts and the associated resourcing challenges as the upturn gains momentum in different sectors/geographies, as well as how to embrace emerging digital technology drivers and disruptors.

The report concludes that the global market outlook has improved compared to a year ago in spite of some major economic and policy uncertainties clouding the horizon – particularly relating to the North American market and Brexit in the UK/Europe – and indicates more precisely where this growth is expected to come from, geographically, sectorally and in terms of services in demand. Over the next five years, the EC market expected to grow by 17.3%, creating $5bn in new market space and bringing the total to $34.4bn by 2021.

Other key findings in the latest global EC market assessment include: